For 47 years, pianos have been Bruce’s livelihood, more importantly, they are his passion.  His background and experience include 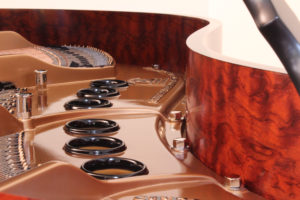 having worked for several major Piano Retailers and Manufacturers, including Baldwin and Yamaha in the 70’s-90’s providing piano tuning, service, trouble shooting and consultations. Consultant for Piano Wholesalers, Int’l, including inspection of used instruments at factory sites in China, S. Korea and Japan.  Consultant for Kawai America, Steinway and Mason & Hamlin.

Bruce is the Proprietor of our on-site state of the art Piano Restoration Facility, specializing in complete belly work, personalized custom action design, concourse plate and cabinet finishes for all individual, commercial and concert piano needs.

One of the first Certified Piano Disc Player System Installers in the late 1980’s; and one of the first installers of state of the art Wessell, Nickel & Gross composite piano actions in a custom restoration.

Even after 47 years in his field, Bruce believes in enhancing his passion for the piano through continuing education and consultations with his peers, and some of the most highly regarded instructors in his field, including Bob Marinelli, Anne Garee, Jude Revely and Christian Bolduc, among others.

On a more personal note:

In his spare time, Bruce can be found out on the flats on the hunt for the next big red fish or snook; tinkering around on a vintage classic car; or perfecting yet another BBQ or Secret Mac ‘N Cheese recipe.  Not only is Bruce the ‘King of Mac ‘n Cheese’, he’s also the ‘Captain of Boiled Peanuts’ !

…Bruce played in 5 different musical groups ranging from Latin to Swing – all during the same time period – AND worked full time running his business?

…he was a founding member and musician of the orchestra now known as the Ocala Symphony Orchestra?

…he has played his trumpet while skydiving!?!  Yes, folks, while floating to earth under that magnificent canopy, the trumpet music was clear as a bell – the Gator Fight Song and When The Saints Go Marching In will never be the same again!

Originally in the legal field, I chucked all that nonsense years ago to join Bruce in the family business. 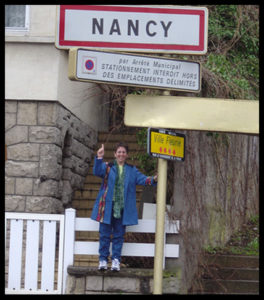 Meeting clients, and assisting them through the process of buying a new piano or pulling a piano action to show them how things ‘work under the hood’ is an absolute delight!  I love to share the advances in piano design, especially the use of advanced carbon fiber technology.

Always a hands on type of person, it just fascinates me how the simple act of pressing a piano key translates to something so magical as music; how each person interprets music and the profound effect music has on our lives.

Bruce and I are proud to be hands on owners of our family piano business.  My mission is to match our clients with the perfect piano for their needs and desires, and to complete that mission at a great value and price – it just doesn’t get any better than that!

On a Personal Note:

Away from Forté Piano will typically find me knee deep in textiles – sewing, quilting, knitting and weaving.  Just imagine!  Weaving fabric and then sewing it into a project or gift.  My brain is always spinning with color and possibilities.

…for a time when Nancy was in High School, she was the person in the Dunnellon High School Tiger costume?

…she has her very own Lego collection and knows how to use them!

…when she turned 40, she jumped out of an airplane.  On purpose.  With full knowledge.  Loved it and has a video to prove it – floating down to earth to the strains of Steppenwolf’s classic ‘Magic Carpet Ride.’

…Nancy shares the same name with a lovely little historical town in France?  And, she’s been there!

…she never ceases to be amazed how relatively few people in the world know these three words have different meanings: ‘there’ – ‘their’ –  ‘they’re’…

“Even if you’re on the right track, you’ll get run over if you just sit there.”  –  Mark Twain

And the prayer of Coach ‘Bear’ Bryant:  “This is the beginning of a new day. God has given me this day to use as I will. I can waste it or use it for good. What I do today is very important because I am exchanging a day of my life for it. When tomorrow comes, this day will be gone forever, leaving something in its place I have traded for it. I want it to be gain, not loss — good, not evil. Success, not failure in order that I shall not forget the price I paid for it.”  –  Author Unknown